Based in Massachusetts, Shanna is an award winning singer-songwriter and powerhouse entertainer, who entered the country music scene back in 2009 and has been featured with many national recording artists since including Blake Shelton, Sara Evans, Gretchen Wilson, and many others. Shanna is also known for her singing of the National Anthem. She has performed for the Boston Bruins since 2009 and is sought after by many in the Military community.

Shanna's style is centered in country, but with roots in rock, pop and soul. Her first Nashville recorded EP in 2013, includes original songs that take a personal look into her life and experiences.  Released in 2017, her single Answer the Call, combined both her career passions: music and her long career as a Public Safety Dispatcher. Answer the Call has gained worldwide attention reaching over 118 countries, streamed over 1 million times on Spotify and iTunes and over 3 million views on her YouTube alone. Not to mention the thousands of videos created by others and in other languages.

In 2020, Shanna went back in the studio writing for a more faith inspired project. Recording in the infamous Rosewood Studios in Tyler, Texas, she released 3 new songs in 2021(Amen to That, God Fearin' Woman and Control) and with more to come.

Shanna has teamed up with the band, Tailgates Down and has begun booking shows in 2022. She continues to write and has plans of releasing more new music within the year.

Shanna Jackman featured on an episode of WCVB 5's Chonicle

"Shanna Jackman will sing the U.S. and Canadian anthems before the B's take on the Edmonton Oilers at TD Garden."

"Rene is a legend," said candidate Shanna Jackman. "It's hard to imagine anyone could fill his shoes, but to be able to connect with Bruins fans just as much as he did would just be really an honor."

Jackman has worked as a 9-1-1 dispatcher for more than 14 years and has filled in for Rancourt in past seasons. The Douglas, MA native, who performed passionate renditions of the Canadian and American anthems at the tryouts Wednesday night, has also performed the anthem at Fenway, for Celtics games and at NASCAR's Sprint Cup in New Hampshire.

"There's a lot of excitement around being here and for the Bruins," said Jackman. "The Bruins take a lot of pride in the anthem, so it's exciting to just meet people and see friends here."

"Shanna Jackman packs a punch in a petite package. Her vocals are strong, her presence powerful and her passion off the charts. It seems she was born to perform. But performing is not enough for Shanna. Her love of this country and respect for our military has lead her to a life of service, as well. Working full time as a public safety dispatcher is still not enough. Jackman often donates her time volunteering, and performing our National Anthem at many Military events." 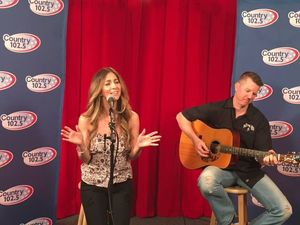 Jackman, who grew up in Milford and Uxbridge, imagined what it would have been like if her niece, a concert-goer, were in the crowd. She also thought about the 911 dispatchers who received the first, frantic phone calls, and about the concert singer who had no control over the safety of his fans.

But the attack won’t stop her from performing. “We can’t live in fear,” Jackman said. She is scheduled to sing the national anthem before a Boston Bruins game later this month.

Shanna Jackman may be from the North but sings with the South in her boots!
February 6, 2016

"Shanna Jackman may have a bit of an accent from New England, but her singing voice is all Southern. Making a return to the Charlie Horse in West Bridgewater, Massachusetts was certainly a homecoming. The venue has an open stage where only a step separates artists from fans."

Read about the story behind "In My Truck": http://countryave.com/in-my-truck/

"Last night was a big night on the airwaves of Milford Ed. TV as the Coleman Candelario "I Believe" Live Telethon rocked, laughed, and celebrated its way to raising over $4,000 in pledges and sponsorships to support Coleman and his family.  A few early technical problems quickly gave way to a night of near-flawless fun with a group of highly talented musicians and very funny comedians.  Co-producer, co-host, and Telethon originator RJ Sheedy and country music dynamo Shanna Jackman kept the evening moving..."
READ More: http://milford-ma.patch.com/groups/milford-performs/p/coleman-candelario-live-telethon-hits-the-mark
WATCH the Telethon here: http://youtu.be/aCxYd8Fey90

Westborough TV: "At Ease"
February 10, 2014
Shanna Jackman's song "We've Got Your Back" is the them song for the local cable TV Show, "At Ease."  "At Ease," is an informational show of interest to United States Military Veterans and their families. It is the official show of MassVetsAdvisor.org, an easy to use online resource created by the Commonwealth of Massachusetts that strives to serve the nearly half-million Veterans living in Massachusetts, and their Families, as a bridge to the many benefits that they have earned in defense of our nation.

ALEX AND ANI: Shanna Jackman wears Alex and Ani
December 31, 2013
"We truly love seeing how our fans connect to our products. Imagine our surprise when we found out up and coming country singer, Shanna Jackman, is a fan ...."

PAPPALARDO: Album Review - Shanna Jackman EP
September 27, 2013
The first thing that struck me when I was listening to Central Massachusetts native and 2010 Cat Country 98.1 WCTK Country Idol Shanna Jackman’s eponymous debut EP was her affection for Martina McBride, a point driven home as much by her vocal delivery as the sonic direction of her music. I was transported back to the Martina era, adn the guitar work from "this One's For the Girls."
READ more: http://jonopappalardo.wordpress.com/2013/09/26/album-review-shanna-jackman-shanna-jackman-ep/

SEMON: Country singer Shanna Jackman not in Kansas anymore
September 12, 2013
Whether opening for nationally known artists such as Blake Shelton, Dierks Bentley, Alan Jackson and Gretchen Wilson, or performing as a bona fide headliner in her own right, Shanna Jackman appears to have what it takes to be a big name in country music.
READ more: http://www.telegram.com/article/20130912/NEWS/309129851/0/SEARCH


SPITZ: Songs in her heart now on EP
September 1, 2013
While her roots are in the Milford region, where she used to sing karaoke at Doc's, her spirit is country, and she hopes to emulate Messina as "a local girl who was able to make it past the stereotype of 'New England girl can't make it in country' (music).''
READ more: http://www.metrowestdailynews.com/news/x1155158543/SPITZ-Songs-in-her-heart-now-on-EP#ixzz2de27ECYS